If we step back a bit in to the history of how telecom networks were conceived and built, it becomes evident that networks were designed in the past to deliver one service at a time. Starting from PSTN voice to cellular voice (and later data) to multimedia broadcast, each network was designed to carry a set of services delivered through a dedicated set of network elements in its path, each performing a set of control functions to deliver the intended service to subscribers. At the core, ATM circuits served the purpose of carrying traffic over long distances over optical links.

Over time IP (Internet Protocol) proved itself to be the most efficient to deliver multiple services with the possibility of applying fine-grained QoS and Security policies on packets flowing through the network, irrespective of the underlying physical layer. Thus we started seeing the first wave of Network Transformation – the process of migrating legacy TDM and ATM networks to a converged, service-oriented, end-to-end All-IP infrastructure. However even as we migrated to IP, we designed the new converged network much like the traditional networks with several fixed function network elements supporting a set of services over IP for each access technology (xDSL, FTTx, Wi-Fi, 3G/4G radio and so on).

Each fixed function network element is pre-coded to handle a pre-determined number of traffic flows (fixed capacity) and perform a pre-determined set of functions (fixed features) that cannot be altered because they are tied to the underlying hardware. Therefore even in a modern day converged IP network, the network operator is dependent on the equipment vendor to bring in new equipment with additional features to support the roll out of a new product/service.

Launching a new service with an end-to-end SLA entails dealing with a complex grid of control functions distributed across several network elements that lie in the path of that service, each supporting different features and configuration options, making new service roll out a complex tedious process.

In addition, today’s networks do not scale on-demand. So operators are forced to design networks keeping peak load in mind – a huge drain on CapEx, and yet unable to cater to unexpected surges in demand for any service. 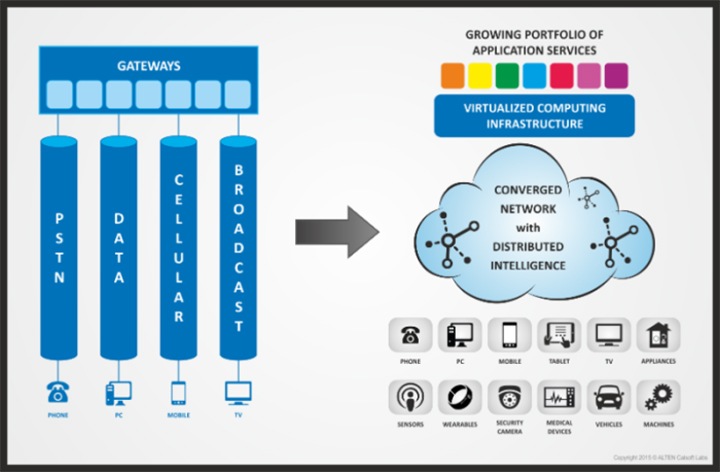 Network Transformation for The Digital Economy

Digital Transformation is ushering in a big change in the way enterprises deliver products and services to their customers. Increasing use of mobile devices and cloud based services is generating new demands on network operators to provision network services on-demand with the same agility that is expected from a cloud infrastructure (IaaS) provider.

An explosion in the number of connected devices is expected in the next few years including connected vehicles, home appliances, digital health monitoring products, and a variety of other sensing and control devices in connected buildings, connected manufacturing lines, warehousing and distribution systems, and so on. Each of these connected devices/systems would need to talk to a growing portfolio of cloud based application services deployed over a large virtualized computing infrastructure (enterprise cloud, partner clouds, government clouds and other public cloud services), with each application having its own security, QoS, guaranteed delivery and end-to-end latency requirements.

Unfortunately present day networks are not designed to meet the level of dynamism, ease of provisioning and service configuration that is expected by the growing number of “new” business applications. Consequently we are at the brink of a second wave of Network Transformation – the process of migrating to a software-defined networking paradigm where network services can be provisioned on-demand and managed by business applications that use them.

Network Function Virtualization (NFV): The goal of NFV is to make network elements independent of the underlying physical hardware, by turning them in to software functions that run on standard high volume COTS servers in a virtualized environment. Such Virtual Network Functions (VNFs) could then be instantiated where they are needed, and made to scale vertically and horizontally much like the cloud infrastructure.

Software-defined Networking (SDN): The goal of SDN is to abstract the underlying physical network and expose a set of services that allow business applications to request network services to be made available between any two VMs or application instances, without having to worry about the individual network elements that are involved in the delivery of the requested services.

So what is the end goal of Network Transformation? The goal is to transform today’s networks to a responsive “service-oriented” end-to-end connectivity infrastructure, where network services can be offered as-a-service to meet the requirements of a growing portfolio of interconnected cloud-based applications deployed over a large distributed compute infrastructure, and the zillions of connected devices that use them.

How Edge Computing is Revolutionizing the Telecom Industry

Harnessing the Power of 5G with Cloud Native Foundation